In July 2021, the European Commission published the Fit-for-55-package including a proposal for a Social Climate Fund (SCF). The SCF is to be established in parallel with the proposed extension of emissions trading to the buildings and road transport sectors, the so-called ETS 2 (European Commission (EC) 2021a). Mobilizing 72.2 billion euro for the period 2025 to 2032, the aim of the SCF is to address any social impacts that arise from this new system, by 1) financing temporary direct income support for vulnerable households and 2) supporting measures and investments that reduce emissions in the two sectors and as a result reduce costs for vulnerable households, micro-enterprises, and transport users. A recently published study by scientists of the Oeko-Institut analyses the Social Climate Fund (SCF) proposal.

Social aspects and a just transition are important elements in the “Fit-for-55” package for a number of reasons: Firstly, vulnerable groups benefit the most from energy efficiency improvement and climate change mitigation. Not only do they benefit the most in terms of energy costs saving in relation to their income but also in terms of improved living conditions and health and by being able to actively participate in the transition to net-zero and by not being left behind. Also, vulnerable groups tend to be most affected by the impacts of climate change, which highlights the need for mitigation efforts that are also socially-just. Secondly, vulnerable groups are most affected by increases in costs and prices that arise through climate investment, carbon pricing, taxes or other policy induced means. Thirdly, low-income households often do not have the means to invest in energy efficiency or clean heating and can therefore not participate in climate change mitigation or become resilient to further price changes. It is thus key to establish a program that explicitly supports vulnerable groups and incentivizes investment and efficiency improvement targeted to their means and needs. The European Commission has proposed the SCF as a targeted policy scheme that is aimed at mitigation, participation, resilience for those in alarming need.

But: Is the SCF designed to fulfill this promise? Is the budget allocated reflecting the level of needs of Member States? And: will the SCF actually help to support investment in energy efficiency and low carbon technologies for vulnerable groups? How can the EU ensure that targeted support is provided to vulnerable groups across the Member States?

2. The SCF approach works well to support vulnerable groups. It presents an important solidarity element for revenue distribution of the ETS 2.

Our analysis shows that the SCF redistributes auctioning revenues to low-income Member States which have lower purchasing power parity and are significantly more affected per unit of energy carrier by a uniform EU-wide carbon price from the ETS 2. Figure 1 gives an overview of revenue distribution from the ETS 2 to Member States under different carbon price assumptions. 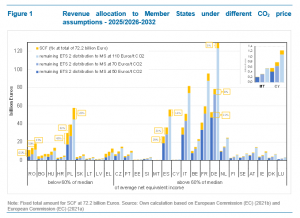 Currently, the Social Climate Fund is fixed at 72.2 billion euros for the period 2025 to 2032. This implies that the share of revenue allocation through the SCF declines with higher prices (see change in share of SCF allocation in Figure 1 for selected countries). This means that a lower share of revenues gets distributed to low-income Members States and the solidarity element declines. To keep the solidarity component, the Social Climate Fund should be a specific and sufficient share of auctioning revenues rather than a fixed amount of 72.2 billion euro. 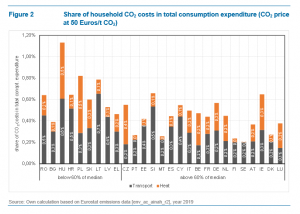 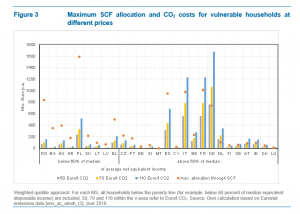 Clean heating technology and building insulation are essential to reduce emissions in buildings and to protect households from high energy and carbon costs.

How can the SCF help to support investments in low-carbon heating? We focus on investments for replacing fossil heating systems by heat pumps in vulnerable households, in our definition these are households at risk of poverty. The investment needs for each Member State depend on the share of fossil heating and the investment costs of the heating equipment. We assume that funding from the SCF is used to cover total costs for a heat pump, so that it is guaranteed that vulnerable households can afford the investment in a heat pump system and have stronger incentives to replace their fossil system and contribute to an high exchange rate.

An early start of the SCF reduces the need for compensation

The replacement rate, for example the share of fossil fuel heating systems that is replaced every year, is an important determining factor for the investment needs. Compensation needs are reduced more rapidly with high replacement rates, as the transition to zero-emission heating-systems is accelerated. 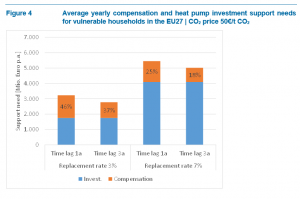 The higher the CO2 price, the bigger the compensation needs 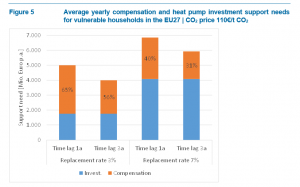 We conclude: higher replacement rates result in higher investment support needed for vulnerable households. At the same time emissions are reduced so that less compensation (direct income support) is needed. If introduced with more lead time (three years ahead of the ETS 2 rather than one year as currently foreseen) compensation needs are significantly reduced. This should, however, not lead to a delay in introducing the ETS 2.

1       Eligibility and monitoring: How can the SCF ensure that climate and social objectives are met?

The Social Climate Fund needs to provide a strong framework to ensure that the funding is used for measures that effectively support the decarbonisation of heating and transport and that it is directed specifically at vulnerable households:

No investments in fossil heating

Moving away from fossil fuels for heating is the most direct way of avoiding paying a carbon price under the ETS 2 and important for decarbonising Europe’s buildings. Investment support provided through the Social Climate Fund must be directed at replacing fossil heating with renewables and supporting deep renovations as defined in the Energy Performance of Buildings Directive. This criterion needs to be clearly formulated and monitored, as several Member States still provide funding for fossil heating. Subsidies for fossil fuel heating would only perpetuate the need for compensation as well as the climate change crisis.

The SCF needs to provide clear criteria to define vulnerability to assess whether the size of the SCF would be sufficient and to ensure that funding is directed at these households. The framework can draw upon experiences with national programmes addressing vulnerable households (see figure below for examples), where eligibility is mainly defined based on income and/or linked to social welfare. Next to support for vulnerable households living in their own buildings, rented households need to be addressed. 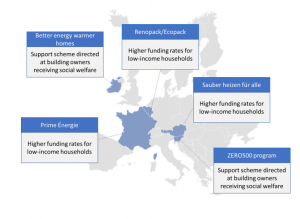 The Social Climate Fund has the potential to be the first fund of its kind to specifically support vulnerable households in participating in a socially-just energy transition through decarbonising their homes and transport. It is an important instrument for redistribution of auctioning revenues from the ETS 2 to low-income Member States which are significantly more affected by a uniform EU-wide carbon price from the ETS 2. The Social Climate Fund should not be a pre-fixed amount of 72.2 billion euros as currently foreseen but be a specific and sufficient share of auctioning revenues to ensure sufficient funding with rising carbon prices.

Heating related carbon costs affect vulnerable households more than transport related costs in most Member States. Therefore, investment in climate friendly heating technology has high leverage for alleviating carbon cost related burden. The Social Climate Fund can provide much needed investment support for vulnerable households to replace fossil heating systems by renewable based heat pumps. However, replacement takes time, so that even at a heat technology replacement rate of 7 percent per year, it will take 14 years for all heating systems to be exchanged. This means, direct income support from the Social Climate Fund will be needed for those vulnerable households whose heating system has not been exchanged yet. Thus, incentivising replacement of fossil fuel heating by renewable heating systems increases total support needs in the short term but is the right approach for a long-term impact on emission reductions, thus reducing the need for direct income support.

Most importantly, a clear framework for eligibility and monitoring is needed in order to ensure that the national funding schemes provide targeted support to vulnerable households to support them in transitioning to fossil free heating and carrying out energy renovation.

Dr. Sibylle Braungardt and David Ritter are Scientist and Dr. Katja Schumacher is Deputy Department Heat of the Energy and Climate Division of Öko-Institut. Sie conduct research to social impacts of energy and climate policies.