Every day her company handles some 100 tonnes of waste. 90 to 95 per cent of this is recycled or reprocessed. To make sure of that, Wilma Rodrigues founded her company, Sahaas Zero Waste, in Bangalore, India. Her aim: to recover as many resources as possible from waste and return them to a closed-loop cycle, sticking to good environmental and social practices. A task with many challenges, because a major part of India’s waste management sector is organised informally. She talked to us for the eco@work about her work. 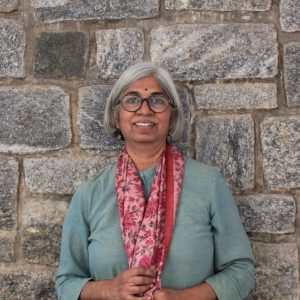 Her company takes care of 100 tonnes of waste every day, and expects to handle over 500 tonnes by 2026. The aim: to recover the resources from waste and transfer them to closed-loop cycles. “India has had a huge waste problem for many, many years,” says Wilma Rodrigues. “There is littering everywhere. Plastic ends up in rivers; electrical waste is incinerated without controls. It all poses an immense threat to ecosystems.”

Rodrigues used her frustration about poor waste management to productive effect when India’s waste management legislation, passed in 2000, put the first structured regulation in place with regard to waste. Just one year later, she founded the Sahaas NGO in Bangalore. “We have set ourselves the goal of creating an awareness that we need to reduce the amount of waste we generate. We are working towards this all over India, often jointly with municipal organisations. For example, we implement campaigns and education programmes.” However, there is one major challenge: the NGO is reliant on subsidies. If the financial support runs out after a few years, projects often have to be handed over to municipal agencies. “Unfortunately, they don’t always have people capable of managing them, which means that worthwhile projects are often discontinued.”

To make an additional impact, in 2010 Wilma Rodrigues founded Sahaas Zero Waste, a company offering a complete, decentralised waste management service for companies, institutions and organisations. “Our customers generate between 5 and 10 tonnes of waste on a daily basis. We can recycle or otherwise reprocess 90 to 95 per cent of it,” says Rodrigues. “A colossal rate, which shows that waste needn’t have detrimental effects on the environment.” Sahaas Zero Waste sends paper, plastic and glass for recycling, while organic waste respectively biomass, which makes up to 50 per cent of the waste, is turned into compost or biogas. “What we can’t reuse is waste that is contaminated, or fractions of waste that are difficult to recycle, such as textiles.”

NGO Sahaas and Sahaas Zero Waste are not only intended to make a difference environmentally, but also socially. For the waste sector in India is largely organised informally, with innumerable people involved in handling waste. “These people are systematically exploited. They work for less than the minimum wage, receive no support from the waste producers, and have no social security. I wanted to challenge these conditions. But a very structured approach is needed if waste management is to be brought into the formal sector.” Sahaas Zero Waste’s nearly 300 employees have access to the minimum wage and social security. 60 per cent of them are women, who often come from difficult economic backgrounds. “As we’re in competition with the informal sector, unfortunately it’s a huge challenge for us to afford decent wages for our staff.” Because of the large numbers of people working informally and for far too little money, Rodrigues explains, companies are used to having waste management done for free – or even receiving money for recyclable waste materials such as newspapers. “It’s often hard for us to make them see how much time and effort goes into our services.”

A systematic change of direction

Wilma Rodrigues sees the enabling conditions for her work as another major challenge. “So far, India hasn’t seen sufficient investment in waste management; nor does it have adequate infrastructure. We are only just beginning to separate waste, and plastic recycling, for instance, is heavily concentrated on rigid plastics.” She is also critical of industry for not adequately meeting its (well-established) obligations. “Many firms are very indifferent about this, even those who could easily afford to pay for decent waste management. They think of it as fully covered by their taxes and something the government has to take care of.” From her viewpoint, what is needed is a systematic change of direction, greater cooperation between waste producers and local agencies. According to the current waste legislation, by 2025 Indian companies must recycle a total of 30 per cent of the packaging they bring into circulation. “There is no way of knowing whether companies will be ready in three years,” says Rodrigues. And she adds: “We need much tougher enforcement of the existing regulation than there has been so far.”

Twenty-one years ago she founded an NGO, and twelve years ago, a company. But despite the many challenges, Wilma Rodrigues has no regrets about taking these steps – quite the opposite. Having previously worked as a business journalist for many years, she views this career change as “the best decision I ever made”. “After all these years, I can see how the organisation has grown, what impact it has brought about and what solutions we have developed. I now feel something really good evolved from that decision.”

After her degree in biosciences Wilma Rodrigues worked as a journalist for the Times of India Group and Businessworld Magazine, among others. She founded Sahaas Zero Waste in Bangalore in 2001, first as an NGO, then as a waste management company with a social focus ensuring minimum wages and social security. Almost 300 people now work for the company. Sahaas Zero Waste currently handles about 100 tonnes of waste daily. The target is to increase that figure to more than 500 tonnes by 2026. In 2015 Wilma Rodrigues received Action for India’s Social Entrepreneur 2015 award. Both Sahaas Zero Waste and its founder have received numerous other awards, including the BCIC Award for Excellence in Gender (Women) Diversity and Inclusion 2021.