This year I started a research stay at the Energy and Climate Division of the Oeko-Institut under the Alexander von Humboldt Foundation International Climate Protection (ICP) Fellowship. This program sponsors young professionals from developing or transition countries to carry out a research project in Germany, which in my case focuses on policy evaluation designs for sub-national climate actions in Mexico. After a first semester amid the Covid-19 pandemic and its respective challenges, I would like to share one of my research approaches.

With the adoption of the at COP 24 it was reaffirmed that regions and cities are a fundamental piece to achieve global climate targets. For activating multilevel climate action, countries are not only encouraged to mainstream their National Determined Contributions (NDCs) into sub-national policies. It is as relevant to have not only a robust transparency and accountability framework but also adequate tools to ensure the delivery and effectiveness of these actions, and here is where my expertise fits in.

Potential of sub-national actors in the climate objectives

There are many studies that estimate the global GHG emissions reduction potential of sub-national along with non-state actors, mostly using information reported in platforms of international climate initiatives (as defined here). For example, a recent study by Kuramochi et al, showed that the mitigation commitments by individual regions, cities and companies in ten major emitting economies, if fully implemented, could lower emissions by 3.8 to 5.5 % compared to current national policies scenario projections in 2030.

These analyses are useful to visualise patterns, trends and gaps of the sub-national climate response, particularly when countries don’t monitor local actions. This could provide elements for integrating these efforts into the NDCs or their increase of ambition. However, it should be noted that the use of broad assumptions, such as the timely and full implementation of commitments, and the lack of a critical assessment of their interaction with policies at the national level, may be limitations to understand their actual impact on the national climate goals.

The extent to which local actions contribute or add to the current national policies requires a tailormade ex-post evaluation, aligned to the national methodologies and tools, like NDC tracking systems. For this, it is important to examine for each action, among others, its ownership, emission’s scope, reference scenario and additionality to the NDC, in order to avoid potential double-counting, or geographic, finance and target overlaps. A second step could comprise the calculation of the impacts on a sectorial base, using homogeneous methodologies across levels of government and finally their aggregation to the “no policy” sectorial scenarios drawn for the NDC. 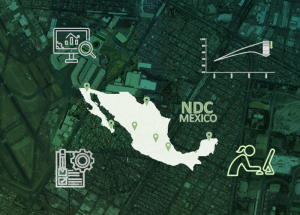 So far only few countries have developed NDC monitoring systems that integrate sub-national efforts, such as the Indonesian AKSARA platform and more recently, the Mexican Sub-national Climate Action Monitoring System, as presented below. Still, it is relevant to learn from the lessons learned from already running platforms and their challenges, such as aggregation procedures and management of inconsistent or incomplete data collection. Under my research I study the reporting system for policies and measures from the European Union’s Member States (EU Monitoring Mechanism Regulation) and the German National Climate Initiative (NKI).

In federal systems such as Mexico, with 32 federal states and 2,457 municipalities, the articulation of climate policies between the federal, state and municipal level is a pressing challenge given the levels’ differentiated attributions, autonomy in policy processes, and technical capacity. Nevertheless, Mexico has taken big steps building an institutional framework to support sub-national climate action.

The latest Biennial Update Report estimated that between 2013 and 2017 local mitigation measures accounted for almost 9 % of the total emissions reductions reported in this period. Nonetheless, the numbers were taken with reservations, urging the development of a monitoring, reporting and verification (MRV) system, able to integrate the different government levels, with standardized methodologies.

As a response, the Ministry of Environment and Natural Resources (SEMARNAT) is leading an important and unique process in the region, through the development of the Mexican Subnational Climate Action Monitoring System. This web-based platform will consolidate the monitoring, reporting and verification (MRV) of mitigation actions, and monitoring and evaluation (M&E) of climate change adaptation measures that occur at the sub-national level. During December it is being piloted with selected federal states and in March 2021 it is expected to be implemented nationally.

For this phase I am conducting a comprehensive analysis of the platform to not only identify gaps and improvement opportunities in its functionality (operation and reporting), but also to recommend a methodological route for a bottom-up aggregation that could link the reductions to the NDC progress, with its corresponding double-counting and overlap analysis.

Is all the tracking and accounting at sub-national levels worth the effort?

While information of the annual progress of the national GHG inventories will always have the last say, having an NDC monitoring system that breaks down to the local level provides several benefits. These include improving the transparency framework and traceability to local action and finance, as well as the mainstreaming of the NDC into sub-national policies and budgets. Others are the use of the information to conduct detailed evaluations of sub-national policies, and open access and knowledge sharing for a range of stakeholders.

However, the success of such systems will still depend on the robustness of the governance, institutional and legal framework, ownership, technical capacity of users, data quality and completeness, financial security for operation and sustainability over time. These are big challenges but all worth the effort to unlock the potential of the sub-national actors as important players in the global mitigation efforts.

What are the next steps of my research?

In the following six months I will continue this analysis which has been benefited by my involvement in ongoing projects from the Institute, such as the evaluation of the NKI 2018 to 2019. This practical experience has strengthened my capacities in my research field and helped me to expand my network. In addition, I will continue to benefit from the rich internal technical discussions that the Institute offers on a regular basis. 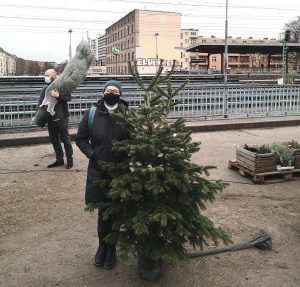 As for my personal experience as fellow, I will keep enjoying the team spirit and (virtual) hall chats. And even without the Christmas Markets, at least having a Glühwein with social distancing in the cold Berlin winter and decorating my rented Christmas tree.

Emily Castro is a Guest researcher in the stay at the Energy and Climate Division of the Oeko-Institut under the Alexander von Humboldt Foundation International Climate Protection Fellowship. Her research focuses on policy evaluation designs for sub-national mitigation actions across levels of government in Mexico.